Plans for this term

We were hoping to get lots of outside games time this term, so far the weather is not on our side. There's still a few weeks left though.

We've got a couple of evenings out planned, we're spending an evening orienteering and our last week of term we'll have a picnic in the park. We're planning to make kites in some of our craft sessions so it will be a good opportunity to test them out.
Posted by Jenny at 11:51 No comments:

Our Weekend at The Burrow

We arrived on Friday evening, everyone was very excited about the weekend ahead and exploring the place we were staying. The building we were in was called the burrow, and it's very unusual because in good weather you can slide the roof off. Fortunately we had plenty of good weather to try out this feature. 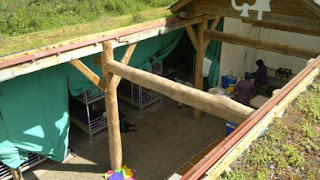 Inside the "bedrooms" were all canvas walls, we've never seen a tent with bunk beds though! Everyone chose their bunk before having some hot chocolate and settling down for the night, we wanted an early start in the morning.
After breakfast we split onto two groups, the first group set off through the woods, leaving a trail for the second group to follow. The trail led us to some caves which the everyone enjoyed exploring. I hope the bats didn't mind too much. 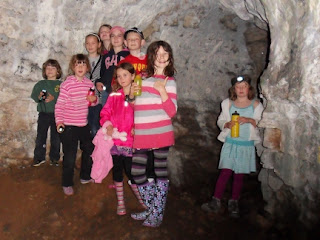 We swapped groups for the return so everyone got a go at laying and following trails.
The afternoon was spent in the field by the site where the children made a series of nests and mazes though the long grass. 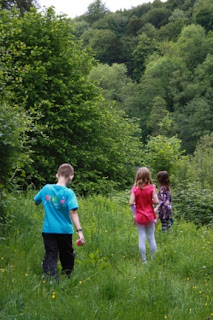 We also got to make a toasting fork for the campfire in the evening. 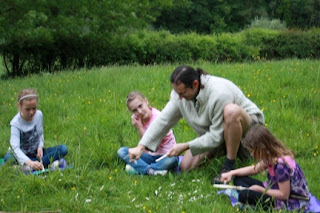 Everyone made a toffee apple over the campfire and we had marshmallows too. 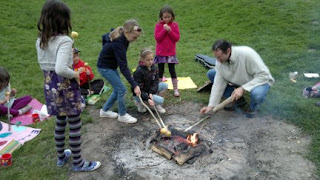 By Sunday everyone was feeling a little tired and just over the bridge there were some carved wooden benches, perfect for relaxing. 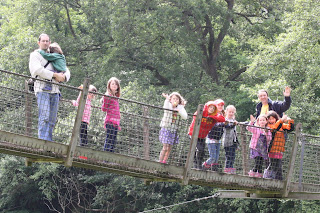 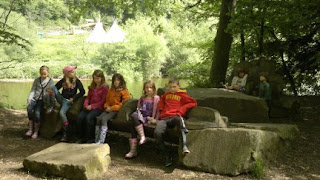 And a final snack in the borrow before we came home. 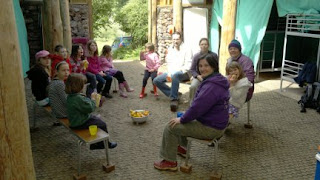 Everyone was in great spirits when the parents arrived to take people home. It was a great weekend and we are already think about planning another for later in the year.
Posted by Jenny at 12:56 No comments: