This week the two groups had some very different activities to be getting on with.

For the Elfins it was a games week, so after our news circle we got out the parachute. When I joined Woodcraft as an Elfin I'd never come across parachute games before, now most of the children had played elsewhere but the parachute still got them quite excited.

We heard some greats jokes inside our parachute "jelly" and had a good few games of bedbugs. However I think we still need a little practice at working together to roll a ball round the edge of the parachute. We didn't quite make it all the way round.

Meanwhile the Pioneers went outside and started work on their first carving project, making tent pegs. It's a nice first project in learning how to handle the knife as there are several different techniques involved in making them. Plus it's always nice to be able to use something you have made yourself. Next week they are going to carry on, after all you can't peg out much with only one peg. 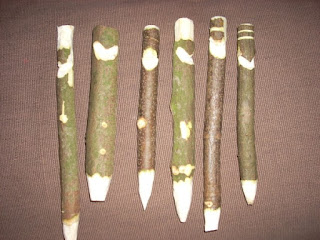 On Saturday we once again took our badgemaker along to the Friends of Jubilee Green fun day. It was a great day, lots to do an perfect weather to make use of the playground.

There was lots to do, everything from bubbles and a magic show to quad bikes and crafts. We still managed to make around 40 badges over the afternoon, it was great to see the designs that people came up with.

Off to a great start.

The first week of term is always lively and this one was no exception, they had so much to tell us at the news circle we forgot the drinks! We also welcomed several new children, I think I hope I got everyone's names right.

As usual both the Elfins and Pioneers had their games together before we went off to our separate activities.

The Elfins were looking at owls, we played a true or false game with some owl myths and facts. Did you know there are around 200 owl species, most of them hunt insects and small mammals but some hunt fish. Some owls can even turn their heads 270 degrees, wow, almost as good as eyes in the back of your head.

We also made our own owls from cardboard tubes 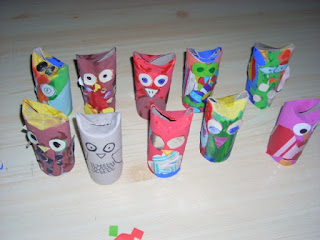 The pioneers went out onto the playing field to try their hand at rigging some tarpaulin shelters. There are lots of different possibilities for setting up the shelters, and hopefully they will remember a couple as we have an opportunity later this months to sleep out in them.
Posted by Jenny at 11:30 No comments:

Great plans for the new term

With the summer holiday over and children starting back at school we have been thinking hard about our activities for the new term. It's shaping up to be a busy one.

We've got lots of activities planned for the group nights, from setting up shelters to making woodland animals in our craft sessions and as always lots of time for games.

Last year we got a grant of £325 to enable us to buy equipment to run some bushcraft activities, over the summer we've been gradually buying the equipment and we are now ready to start using it. We've got an evening in the woods planned for the end of term to set us off.

There's also a fun day, joining with other groups from around the South West and more locally we'll be at the Friends of Jubilee Green Fun Day on 8th September.
Posted by Jenny at 01:25 No comments: